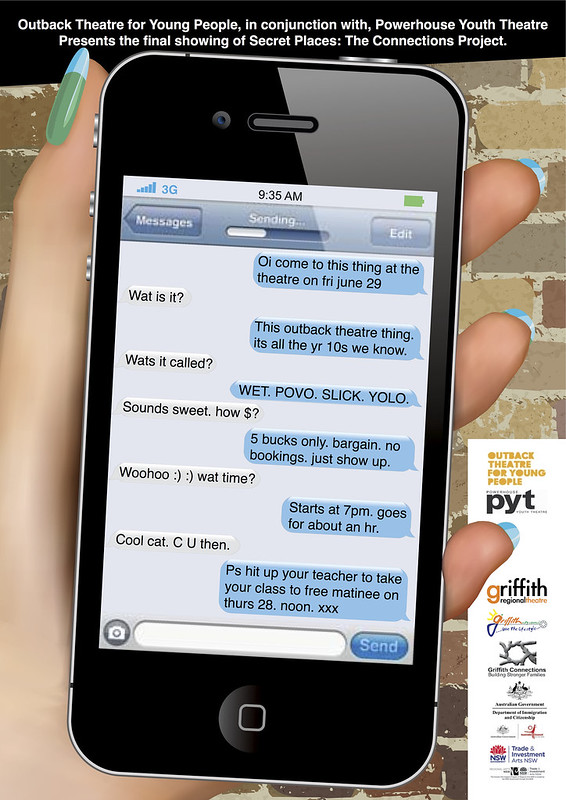 It is bold, contemporary and funny – everything young people in Griffith are. On the 28th and 29th of June, over 40 of them will take to the stage in the final outcome of Outback Theatre for Young People’s Secret Places: The Connections Project.

Since October 2011, the participants of the project in Griffith have been connecting with young people in Western Sydney. Over 6 months, they have been engaged in remote collaboration to create exciting new theatre material. Communication has been through photos, maps, letters, blogs and video conferences. Earlier in May, funding was also received to allow the groups to meet face to face, literally bridging the geographical and cultural divide.

Throughout the project, young people from Griffith and Western Sydney, have devised a list of 16 common stimuli to feature in their productions. The list includes theatrical ingredients that cover character, setting, themes, lines of dialogue, props, songs, and concepts. Each of these have been interpreted differently based on the interests, values, beliefs and cultures of each side.

Despite the seeming disparity between regional farming life in Griffith and the immigrant experience in Western Sydney, the young people have celebrated the universal similarities between them and learned to respect the stories that create the identity of others.

“I love the chance we’re getting to make up our own stuff. I love knowing that there are young people far away from us doing the exact same thing. And I love the idea that very soon we’ll all be putting on a show at the same time” says Grace Blumer, participant.

“The students have an astute level of pride in their work not seen outside of the program.” Says Wade High School teacher, Corey Wheeler (Griffith). The focus on connections has also prompted the Griffith young people to look at their own backyards. “Since the program’s commencement, the students have worked more closely with Griffith’s other public high-school through rehearsals, public performance and through the excursion to Western Sydney. A heightened sense of tolerance and respect has since been fostered between the two schools” Mr Wheeler reports.

“This is a once in a lifetime opportunity for these young people. They are having the chance to tell their stories, discover other stories, and shout them out to the world” says Alex Walker, Artistic Director of the Griffith arm of the project. “It is an absolute delight to see these young people grow through the process.”

We acknowledge the First Nations peoples as the traditional custodians of the lands and waters where we live, learn and work, and we pay our respects to Elders past and present.

On the Road: From Griffith to Western Sydney